Surely I don't need to be writing this post at all. Right?

"It's time to stop treating us as two equal sides in a reasonable debate. Let's get it clear -- they are the perpetrators and we are the victims. Any discussion of how to de-escalate the situation should take place within the anti- abortion community. "We do not have anything to bring to the table," said Convisser. "We are not willing to say it's O.K. to shoot every sixth doctor or woman." 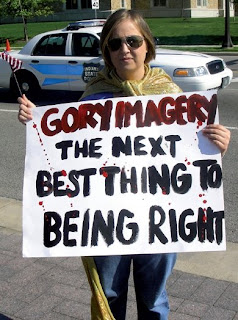 Recently I attended a conference all about abortion. It was pretty awesome. I met providers of abortion care, advocates for abortion access, researchers of abortion medical protocols -- and even some fellow abortion bloggers!

Speakers included lawyers who prepare court cases defending the right to abortion from encroachment by state legislators; counselors whose experience assisting abortion patients stretches back to before Roe v. Wade; and the women of the Chicago Abortion Fund representing their efforts at grassroots advocacy for patients by patients, which was incredibly cool.

You know who else was there? Security guards, lots of them, and police officers with explosives-sniffing dogs. Not because they were called in to investigate something, just, you know, every day of the conference as a routine precaution. There was a panel staffed by First-Amendment lawyers, criminal prosecutors, and law enforcement experts. It was all about how to respond to violence and harassment against abortion clinic staff and patients, and what threats are and aren't actionable. You could tell some of the abortioneers in attendance were relieved by the rare chance to talk about what they were enduring and to be around others who understood.

Curious what sorts of activities have been documented? Or what threats aren't actionable (or whether it depends on a particular judge's mood on a particular day)? You might be surprised. You'd definitely be disgusted. No matter what your political stripe, I'm pretty sure you think of yourself as a decent person who wouldn't stalk people, threaten harm to their families, kill their pets and destroy their homes and workplaces in order to get what you wanted. You might even go so far as to say, "Hey, that sounds like, um...terrorism?"

Does your movement accept someone who firebombs women's clinics? How about someone who bursts into them with a shotgun and murders whoever he sees first? Someone who conceals explosives underneath an overturned flower pot, maiming a nurse and killing the security guard who stops to straighten it?
Someone who burns down a doctor's house and barn, killing horses and a dog and a cat? Someone who shoots a hero in the fucking face in his fucking church?

How about the people who visit clinic builders' neighbors with photoshopped fetus posters or greet nurses by name at the door of their own homes? The people who park outside my friend's apartment building night after night, or the ones who followed my patient as she drove home from her appointment? The ones who line the sidewalks outside of clinics and jeer, insult, shove, and elbow pregnant women and their partners and their mothers and the people helping them get inside the clinic? Who say creepy but just-vague-enough shit to clinic counselors as they walk in to work, on the phone at work, in the mail at work?

Not the same, you say? They're only expressing their concern and compassion for the innocent? Protected free speech? I wonder what you'll say when yet another one of those "sidewalk counselors" is added to the list of those arrested for harming born, life-living women and men.

I hate that I have to choose between talking about this so that everyone will know, or reassuring my parents and siblings and partner and best friend that I'm fine, my clinic is fine, we have police-caliber security staff and bulletproof glass and a relatively quiet neighborhood populated with relatively friendly businesses. But those ARE the options, because quitting this work is not an option.

I'm fine, my clinic is fine. I just need to: take a different route to work each day, live in a walk-up, never be a homeowner, not shop online, marry a police officer, not have kids or pets, never be famous, not write about my school or my neighborhood or anything about my family, not tell people I meet about this wonderful blog for fear they might connect the dots. You want to talk about common ground? I'm doing lots to meet you there. What are you doing to prevent my murder?

Posted by placenta sandwich at 10:09 AM