Evolution of my choice 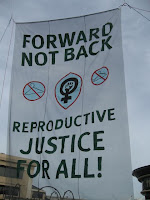 For a while, I was "pro-choice." It's the pretty, socially acceptable to say it. When I started working at the clinic, I became "pro-abortion." And the longer I worked at the clinic, the more I became "pro-reproductive justice." It tends to evolve like that. And while I was in a (heterosexual) relationship, I was absolutely in favor of abortion for myself. I've never wanted to have kids and I'm fairly certain that I would go crazy (literally) if I had to carry a pregnancy past 6 weeks, and even that is pushing it. So, we used birth control pills AND condoms and I took monthly pregnancy tests at work just in case. And all the while, I knew, with some wonder and fascination, that if I had wanted to have a child (for some reason), I could. Rather, we could. It wouldn't have been the easiest or most affordable thing in the world, but it sure could have been more difficult. With our powers and incomes and backgrounds combined, we had support and money and resources.

What I did, instead, was abort that relationship (see what I did there?), and now, I'm subsisting on my meager hourly wage, living solo in a tiny apartment, any conception would be immaculate, and I am still certain that I never want to be pregnant. But when it occurred to me that if I got pregnant and wanted to have a child (for some reason), I couldn't anymore. For all intents and purposes, my critical demographics shifted and if I had a baby, I would be a single parent with an income that only supports one, and this weird, hypothetical kid and I would suffer. Don't get it twisted, I don't WANT a kid, but it was a strange, rude awakening to know that my prospects as a parent or not flipped upside down with such a simple life change. In a matter of days, really, abortion became less of a choice and more of a necessity. I would make the same choice as before, of course, but it would be a little bit less just. And if that's the way it is for a white girl with a upper-middle class background, just imagine how it is for some other populations. Actually, I don't even have to imagine it...I wish it were just imaginary.
Posted by Desembarazarme at 5:43 PM