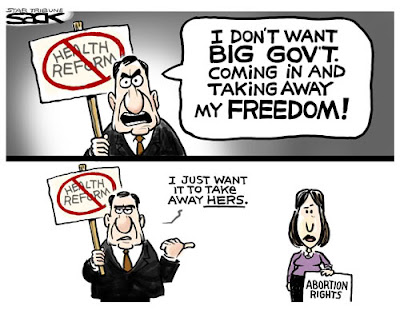 I decided to post an excerpt from a paper I wrote. In case you didn't know the specifics, now you do.

On March 24, 2010, President Obama issued an Executive Order that prohibits the use of federal funds for abortion services (except in cases of rape, incest or life endangerment of the woman).[1] This provision continues the ban on federal funding of abortion that was set in place more than 30 years ago by the Hyde Amendment. Proponents of the Hyde Amendment assert that it is their democratic right as policy leaders, to express their opinion and be able to exert their beliefs in the health care debate.

Currently, six million women of reproductive age obtain health care coverage through the Medicaid system.[2] Federal bands on funding for abortion services have severely restricted access to safe abortion care for thousands of low-income women who depend on the government for their health care. Poor women especially, are unable to exercise their constitutional right to choose abortion when public funding is restricted. An estimated 18-35% of Medicaid-eligible women carry their pregnancy to term because they cannot afford an abortion.[3] While Medicaid does not allow federal funding for abortion, it does provide funding for childbirth.[4] Medicaid insures one-fifth of the nation’s children and pays for one-third of all childbirths.[5]
The Hyde Amendment is a discriminatory policy that targets poor women, who are disproportionately women of color. Women who are not covered under the Nation’s Medicaid system, are either not enrolled in the program, undocumented citizens, or not eligible under the Federal Poverty Income Guidelines. Women who can afford to pay for an abortion on their own, ranging from approximately $300-$500 for a first trimester procedure, are mostly unaffected by the Hyde Amendment’s restrictive policy. An estimated 18-35% of Medicaid-eligible women carry their pregnancy to term because they cannot afford an abortion.[7] There is a huge disparity between impoverished women and middle/upper class women. In 1983, AGI researchers found that “nearly 60% of Medicaid recipients said that paying for an abortion caused serious hardship, compared with only 26% of non-Medicaid-eligible women.”[8] Although Roe v Wade gave women the constitutional right to have an abortion, they are unable to exercise this right when access and affordability of services is denied. The Hyde Amendment makes real reproductive “choice” a privilege for those that can afford it, rather than a constitutional right guaranteed by the Supreme Court.[9]