I dunno what y'all like to read with sunscreen on your nose and sandals on your feet. Me? I'm not a "Fifty Shades" kind of girl, so I usually stick to non-fiction and preferably something topical. But it can't be too dense (speak English at the beach!), it has to have good readability (I looove offset quotations), and it has to be something I care about (hint hint). 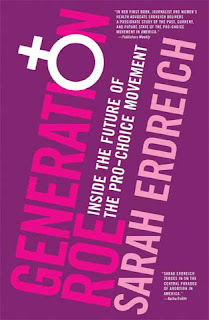 You MUST swing by your local library/bookstore/kindle app and get your hands on Generation Roe: Inside the Future of the Pro-Choice Movement. Author Sarah Erdreich is a fellow writer, feminist, and activist who, like many of us, grew weary of the platitudes and talking points about abortion. So she took to the streets and interviewed some of the most prominent providers and activists in the movement (not to mention the Abortioneers!) to demystify abortion and bring important themes to the forefront. Generation Roe is honest, not to mention painstakingly researched. It's so refreshing to hear the story straight from those who live it, and also to read about their reactions to the project; so many women have never told their stories, have never been asked. This book is a priceless resource for providers, counselors, advocates, and anyone who needs to know that they're not dealing with anti-abortion craziness alone.

On top of that, Sarah's just a super cool person. From the first line ("I am not a Nazi.") I just knew we'd get along as we dove head-first into a journey through Abortionland, from the pre-Roe era until today. She explores personal stories from women who had abortions, legally and illegally; providers who risk their lives daily to provide the necessary service; and even devotes a full chapter to the treatment of abortion in the media (Chapter Four: (Mis)Representations of Reality). And she's even open-minded and brave enough to wander into the anti-choice crucible that is a protest on the National Mall. All to put together this amazing collection of stories for us. Brava, Sarah, Brava!

Just....read this book, OK? It's really good. And if you can't take my word for it, take Gloria Steinem's!*

*Oh yeah it also got stellar reviews, and not just from the feminist community either!


Midwest abortioneers and others-- did you see this? This Ohio bill will require abortion providers to obtain hospital admitting privileges BUT ALSO specifically prohibit them from making such arrangements with any public hospital or even any doctor employed at one. Funnily enough, in the US the largest operator of non-public hospitals is...the Catholic Church.

Even before these new tighter restrictions are voted on, one Toledo clinic has just closed due to these issues and another is expected to do so soon. You can read more details at the Salon article.

Ohio's provider landscape will look something like this, I guess:

I've been thinking about this issue a lot since the admitting privileges strategy seems to be increasingly popular in the past 1-2 years (and alarmingly effective) in the quest to eliminate providers -- but this is the first state hospital requirement I've seen where state hospitals would be explicitly off-limits in your efforts to comply with the state's hospital requirement. That feels like some next-level, Vonnegut-Kafka-MontyPython type shit (cause I can't decide whether to laugh then cry, or cry then laugh).

If you work in a hospital or ED setting, I want to hear about it: Has the topic of admitting agreements with abortion providers ever arisen in your hospital? And while we're at it, what about emergency treatment for pregnant intakes (including urgent abortion care) more generally?

Images from: The Notebook, Toothpaste for Dinner
Posted by placenta sandwich at 8:29 AM 1 comment:

My heart needs a break from breaking

Have you been reading the news lately? I have, unfortunately. It feels as though current events have just been an unrelenting stream of examples of the horrors and cruelty that human beings are capable of inflicting on other human beings. Thanks, murderers and abusers and rapists and torturers, but we don't need more examples. We get it. You can stop now.

And in the last several hours I've done only two things: read about the latest awful case of kidnapping and almost-unspeakable abuse, the one in Cleveland, or stewed over it while unsuccessfully attempting to focus on other things.

But I'm here trying to write something because there's a part of me that's sure someone will ask. Or assume. How many hours or days til the half-witted comments hit, ones about how this is all because of the "culture of death" that abortion perpetuates? OR the ones asking why I "care" about this but "don't care" about the trial of Kermit Gosnell, a man who stands accused of killing babies and calling it abortion?

I ask because because it's so, so, so routine; these words have likely been uttered on several prominent anti-abortion blogs today. But I don't want to go find out.

Sometimes, despite being a super-famous internet celebrity (humble joke), and despite bearing the weighty mantle of spokesperson for ALL abortioneers and being asked for comments on ALL bad things that happen to babies or fetuses or embryos (angry joke), a person's got to have some time to themselves to deal with pain.

We often have stuff to say about things that show up in the news, but I'm not interested in being a ripped-from-the-headlines current events commentator. I just wanted to tell my truth, particularly in times when it wasn't represented elsewhere. But you're probably sickened and saddened too, and that's the truth for all of us. 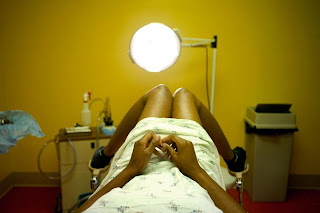 If abortion was a human it would be considered *over the hill* by traditional celebratory standards. But abortion is not a human and the road to justice is ongoing, if not endless.

In fact, when the Abortioneers started this blog a few years ago, we were wee warriors with fresh hearts and brilliant dreams. Triumphs and defeats ebb and flow and every Abortioneer is still toiling for justice. Albeit, recognizing and executing the work/life balance that must transpire if one if to fight this fight until every last uterus is liberated. In other words, even when we are silent and the posts are lagging, the Abortioneers are Abortioneering.

Plus, we’re curious about you. What are you doing today, 40 years past the monumental Supreme Court decision, to celebrate legal abortion and/or to fight the good fight? Please share…

We’d also like to share this contribution to the ever-growing source of knowledge that is the internet:


For Roe’s 40th, Physicians for Reproductive Choice and Health (PRCH), has released the video Voices of Choice online, in full, for the first time: http://www.prch.org/physicians-voices-voices-choice.

The 25-minute documentary, produced in 2003, provides firsthand accounts of the suffering before abortion was legalized, from doctors and advocates who helped as many women as they could obtain safe care before Roe v. Wade. Among those featured: Byllye Avery, Dr. Curtis Boyd, Dr. Eugene Glick (1929-2010), Dr. Mildred Hanson, and Reverend Howard Moody (1921-2012).

Go forward and be merry (in spite of everything)…

Posted by daughter of wands at 4:23 PM No comments: