OK, so this is what I had written as my Blog For Choice last week. I am nervous about posting it.


Today at work I saw a coworker taken to task by a supervisor for having an "attitude" about her workload, "particularly on Roe day" -- a subtle suggestion that if we are not always whistling while we work (and asking for more) it's because we are not committed to the cause.

Well, I am calling that out. Commitment to a cause is not the same as slavish devotion to an organization. Commitment to the work is not the same as letting your boss wring the life out of you. And working for justice for women shouldn't entail acquiescing to injustice against workers. The implicit conflation of these things pervades my organization, from my boss who feels obligated to always produce more work on shorter resources, down to our part-time employees who are explicitly excluded from benefits, started at barely minimum wage, and not given one word of thanks on Roe Day for helping to make accessible what Roe v. Wade made legal. And I'm ashamed to say I didn't even realize that oversight until after the workday was over.

So. Today I meant to blog for choice, and I don't have anything good to say because I am upset about trivial things. But tonight I also saw a wonderful documentary on the state of legal abortion, and I got to speak with a woman who founded an underground abortion service in the 1960s (Jane), and I saw women come together to raise money for a stranger who can't afford her second-trimester abortion tomorrow morning, and I had dinner with women that I love and we talked about abortion the whole time. And this is my life, and I don't want to change that, but I want the rest of the world to know this:

My life is relatively easy, and I earn enough money to live comfortably; but, disclaimers aside, I do relatively thankless work that no one would do if they did not love, really love, abortion rights. I am not asking you to do this work. I am not asking you to understand it, or lobby your representatives for comprehensive universal health care, or even donate funds to the women who reach out to me because they are in crisis. Damn it all, I just want you to stay out of my way.

Don't harass me. Don't prank call me. Don't leave threatening leaflets in the lobby of my workplace. Don't follow my coworkers on their way home. Don't videotape women going into Planned Parenthood [tried to post a clip of this happening near my office, but it's been taken down]. Don't crash your SUV into an abortion clinic, or load your car with explosives before you crash it into what you think is an abortion clinic but isn't, you dumbass. Don't carry posters of bloody stillborns and claim they are aborted fetuses. Don't tattle on my patients to their mothers who may throw them out. Don't clog our phone line with your "investigative research" calls. Don't hurt women. Don't get in their way. And don't get in my way, because I don't do this because it is easy or rewarding, I do it because I have to and I will continue to do it and your half-hearted protesting outside my clinic for forty-five minutes on Saturdays before the cold weather gets to you is not going to change that.

Just stay out of my way. My work is hard enough when it's just confused management, pointless administrative jams, and tears and angst and impoverished women and saying things like "do you need adoption referrals?" because someone's situation simply does not allow her to have the abortion she wants or needs. And if you're not going to send me a raise or an extra coworker or a new generation of abortion providers or the repeal of the Hyde amendment, then at least fucking stay out of the way.
Posted by placenta sandwich at 7:36 PM No comments:

Blissful blissings: dancing in the streets 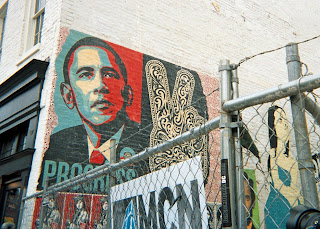 Met  a woman this morning--distraught. She wasn't having an abortion. Her daughter was. She was in a fit because of the protesters, the past and her now. She was wet-faced, having trouble breathing, sleepless, possibly drugged. Bi-polar. It was early. She worked nights.

The anti-abortion protesters come every Saturday with their dead-baby signs and pray (prey) like they're closer to god. It's shitty. They were around when she had her abortion. She was distraught because they were still there for her daughter's abortion and it's still not easy. Sometimes worse...He left her. Her teenage daughter is pregnant. She's still sad and thinks of a baby.  Feels stressed and lonely. Is alone. Tearful woman.

I agree almost whole-heartedly with my father: wish a president would move in quietly and ask for a good-night's sleep because there is a lot to do. No parties, please. Put your moula away. Better yet: share!

That being said and come what may, bad neighbors are about to move away.  Putrid. Nasty. Bush's. Cheney's. Goodbye. How you've turned my stomach with your sirens and guns.

This morning, the woman found this, after all that, to smile for, for moving on: Barack Obama will be president. His face is on my metro ticket. The White House is under transition for a new tenant. This year will be honest. Things may not fall apart after all. Welcome, Obama's. Let the welcoming begin...

Posted by daughter of wands at 10:03 PM No comments:

A Blog for Justice!

Welcome to the blog of the abortioneers.

Even if you're pro-choice, even if you've worked at NARAL, even if you've done gyno exams -- if you're most people, you still don't know the ins and outs of abortion. It's not your fault: there's not a lot of material out there that speaks openly and truthfully about what it's like to provide abortion-related services; and it turns out that abortioneers often hang out with other abortioneers, depriving non-abortioneers of their experiences and perspectives.

We are hotline educators, pregnancy-options counselors, fee fundraisers, procedure assistants, clinic escorts, volunteer drivers, future clinicians, and more. You may already know someone like us, and if you do feel free to point them here too. We hope this blog will be a source of insight for those who are not abortioneers, and a source of comfort and company for those who are.

Today is the anniversary of Roe v. Wade, the 1973 Supreme Court decision that found bans on abortion to be unconstitutional. Every year, bloggers mark this day with a "Blog For Choice" event. Our inaugural post is in honor of this day, but we hope to blog for choice (and for justice, and about our work days, and about the concept of "choice," and so much more) every day here.
Posted by placenta sandwich at 12:00 PM 1 comment: