What's love got to do with it? 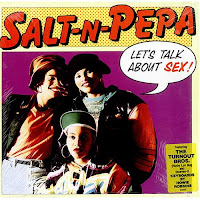 "Sex is painful, but I'm fine."
"He said he'd pull out, but I guess he didn't."
"I don't think I've ever orgasmed."
"I don't really enjoy sex, but I just get through it because that's part of being a woman."
"I told him I was pretty sure I was ovulating, but he didn't listen."
"I have to put the medication IN my vagina?! Which hole is that?"
"He doesn't think it's important to use birth control."

I don't think that a lot of abortion clients are having particularly good sex. At all. I've heard all of the above statements from women I've counseled and my co-workers and I have had meetings about expanding birth control discussions to include questions about sexual side effects since so many women seen hesitant to bring those up if they even recognize them in the first place.

Our clients aren't dumb, and I'm not blaming them for the lack of sexual empowerment I've seen from working at the clinic. But they live in a society that values male sexual satisfaction to the extent that Viagra is lauded as a discovery tantamount to the Polio vaccine (vaccine/autism debate notwithstanding). They live in a society that only refers to vaginas as "down there," and limits related dialog to freshness, which brings right back to the obsession with male sexuality. We all know the axiom that if men could get pregnant, abortion would be a sacrament," and I bet you that if a man experienced pain during sex, a full-scale, multimillion dollar investigation wold be launched.

And that male-centric sexual society is the one that values the cuuuute little baybee fetus and refuses to even acknowledge the enormous amount of women's rights involved in the need for choice and the need for abortion. And sex is about communication and bonding and mutual pleasure (usually about these things. I know it's not 1956.), so if the sex complaints above are any indication, of course the couple is in no position to bring a baby into the relationship. And I'm so glad there's a choice available, but that choice sure doesn't exist in a vacuum. (No pun intended.)
Posted by Desembarazarme at 7:00 AM

Email ThisBlogThis!Share to TwitterShare to FacebookShare to Pinterest
Labels: a day at the clinic, counseling, desembarazarme, Sex, shame