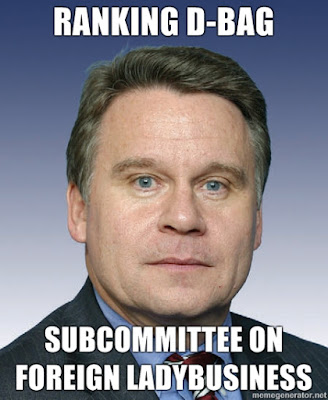 Good evening! Just wanted to let you know that Kelly, the brilliant and gracious creator of Schooling Chris Smith, is hosting a cross-post of sorts by yours truly.

Before I get ahead of myself-- do you know who Rep. Chris Smith is? Well, number one, he's a douchebag, and number two under-informed and number three not very good at rhetoric; let's just say all that up-front before you read his op-eds and injure yourself trying to understand what the fuck he's going on about.

Number four, he's also a member of Congress (R-NJ4), and among other things he's the ranking member (second only to the chair) of the House Committee on Foreign Affairs's Subcommittee on Africa and Global Health. What does all that mean? Well, as Schooling Chris Smith puts it, it means he gets "to be seen as a strong proponent of human rights despite his complete opposition to full human rights for women." To continue quoting Kelly:

Back in September, the Washington Post published an op-ed by Chris Smith urging activists not to sidetrack the U.N. summit on global poverty by talking about abortion (which is kind of hilarious, considering this is one of the guys who sidetracks women veterans' health care into abortion politics). His op-ed obviously speaks for itself by claiming all abortions cause psychological damage for women and implying that human trafficking and child soldiering are caused by abortion (I have to admit, that's a new one for me).

Some letters were published in response to this piece, but one wasn't. [That's mine! -PS]

So, yeah, being ranking member of the House Committee on Foreign Affairs's Subcommittee on Africa and Global Health (takeanotherbreath) also means he gets to say things about global health and international development policy and have them published in newspapers. Even though he hasn't done his research, doesn't know his facts, and can't string together a logical argument. (Am I bitter that I do ALL these things but don't get published in the paper? Not at all!) The Post published a couple responses that (rightly) pointed out Smith [a] was dragging abortion into the conversation from out of nowhere and [b] had glaringly omitted mention of the life-saving importance of contraception. But those responses themselves completely omitted mention of the many errors and false claims Smith made about the role of abortion in saving lives.

Even though it's well past September now, the inauguration of Schooling Chris Smith got me thinking that I shouldn't let a good letter die unread. (If I do say so myself.) Without further chitchat, here it is:

Re: "Abortion does not further children's health," Chris Smith, op-ed 9/19

Rep. Chris Smith's op-ed was long on claims, but short on facts. Having engaged in research, education and service provision in the field of reproductive health, I am left wondering on what evidence Rep. Smith based his assertion that abortion harms children's and women's health (the focuses of the UN's Millennium Development Goals 4 and 5). His attempt to exclude abortion from MDG efforts, discarding established medical evidence in the process, is the real threat to the health of women and the children they already have.

The statement that abortion is "by definition, infant mortality" is silly, as all abortions are, "by definition," performed before birth, which precedes infancy. Terminology aside, Smith's concern for embryo survival leads him to overlook the actual women who die when safe abortion care is out of reach: some develop severe pregnancy complications; some have ectopic pregnancies; others drink bleach, insert sharp objects, or jump from tall heights in an attempt to end pregnancy themselves. Each year an estimated 50 million women worldwide obtain abortions, half under unsafe conditions; worse, the vast majority (95%) of those unsafe abortions take place in the developing world where treatment for complications is harder to obtain. As a result, around 70,000 women die each year due to unsafe abortion, and millions more suffer nonfatal injury and illness. Yet abortion performed by a trained provider in a sanitary setting is one of the safest medical procedures in existence -- much safer than carrying a pregnancy to full-term delivery, as a matter of fact! Contrary to Smith's insinuation, repeated and rigorous cohort studies demonstrate the error in claiming that properly-performed abortion causes physical or psychological complications.

Disregard for the value of human life, as Smith calls it, is made manifest in the poverty, illness, and avoidable death experienced by families who cannot afford another mouth to feed or who lose a caretaker to eclampsia, hemorrhage or sepsis. If safe abortion is struck from the agenda, then unsafe abortion will simply continue to kill women and orphan their children.


placenta sandwich, A.D.D., I.B.S.
Vice-President of Irritated Blogging and Letter-Writing
The Abortioneers
Credentials Out The Ass

(Actually, I gave them my real name and my real credentials-out-the-ass.)

There was so much more I had wanted to say, but brevity is the soul of getting published, I was told. (Am I bitter that I chopped a bunch out but didn't get published? Not at all!) Like I also wanted to say that there's empirical evidence at the family level that maternal morbidity and mortality (for example from unsafe abortion) results in greater child mortality. Not a shocker. And also that anyone who knows anything about health infrastructure can tell you that women in Chile and Ireland survive (mostly survive) their countries' abortion bans because they have access to doctors trained to treat complications of illegal/DIY abortion, not because they've stopped having abortions! Anyone who thinks an abortion ban would not increase mortality in a country with poor health infrastructure and lots of remote rural area -- like, say, Ethiopia or Zambia -- would surely not qualify to be on anyone's Subcommittee on Africa and Global Health, right?   Oh... wait. (Still not bitter!!)

I'll leave it there and ask you to head over to Schooling Chris Smith to discuss Kelly's question: What would your letter in response look like? What else has been left out?
Posted by placenta sandwich at 6:07 PM