If you split the data up by borough, it looks like this:

And just for fun, I looked up the poverty information for those areas:

So the areas with larger numbers of impoverished people also have higher abortion rates. This is not a coincidence. If someone is already struggling to make ends meet, pay bills, put food on the table for the kids she already has, how is she supposed carry an unwanted pregnancy to term and pay for all the expenses that come a long with a baby? Further, when you factor in the unemployment rate, the economy sucking for that past couple of years, etc, it shouldn’t really be that surprising women choosing to have abortions.

Archbishop Timothy Dolan said at a press conference, “That 41%(3) of New York babies are aborted, a percentage even higher in the Bronx and among our African-American babies in the womb, is downright chilling.” He then proceeded to criticize sex education programs that promote condom distribution (!).

Dolan’s statement is painting these poor, low-income women as some sort of villains. Using the language “downright chilling” in the same sentence as “babies in the womb” reminds me a lot of “cold blooded murder.” Not that I think that’s what he is necessarily saying, but, you get my point.

I’m sorry, but whose 'fault' is it that these women need abortions? How did they get pregnant? Families from poor areas are more likely to receive NO sex education (4), so they are less likely to be informed about birth control. They are less likely to be able to pay for birth control. They are less likely to have resources to go to a doctor to get their BC prescription refilled. I could go on. Getting resources like Medicaid, food stamps, etc. requires breaking through absurd amounts of red tape. Yet, antis will stop at nothing to prevent these women from obtaining abortions. Sorry, but a basket of baby formula and a few blankets isn’t going to get up in the middle of the night and check on a crying baby. Coupons for discounted diapers aren’t going to pay for new clothes every couple months as the baby grows.
As I looked through the report one thing that struck me was the abortion rates have actually been pretty consistence for the NYC region. 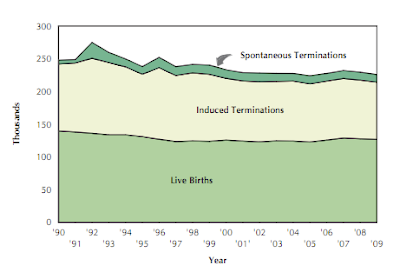 Since the 90s, the number of miscarriages, abortions, and live births has actually declined. However, what is happening in NYC is not a new phenomenon by any stretch of the imagination. New York has had higher abortion rates for the past couple of decades. Why?

So, what do we take away from this?

First, I think that these religious groups are approaching this in the wrong way. Speaking of this situation in a negative way further stigmatizes abortion. Women go through enough when they have an abortion; they don’t need anyone from our society making them feel shamed or bad about it. If people truly want to reduce the abortion rate, they need to turn to birth control. Access to and proper use of birth control is the easiest and most effective way to reduce unintended pregnancies. Abstinence education does not work.(6) If you want women who do end up getting pregnant to carry the pregnancy to term, expanding social welfare programs to enable her to actually provide for her children would be a good step. Of course, that would require antis to pay more taxes (re: not happening).

What do you guys think? What else can be done to help improve the situation for pregnant women in NYC?