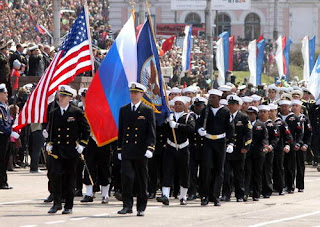 I went to an NFL football game recently and was shocked by the amount of “military worship” (as I like to call it). During the game there were multiple video stories of vets and what they went through and they also presented an injured vet with the home team’s football helmet (apparently replacing one form of armor for another). Ever since “Operation Iraqi Freedom” began in 2003 it seems that many mainstream events and media outlets tend to do segments/pieces where they honor a military vet, or a current soldier, or their family, or someone who was injured serving in the war.

The language around these events and soldiers use lots of phrases like “fighting for our freedom”, and “fighting so you don’t have to”, and “heroes in the war on terror”.

I do agree that soldiers face many risks and do honorable things. However, I have always felt that there are many more people who are not in the military who deserve just as much appreciation and dare I say worship! The same things we say about soldiers can easily be said about those who work in abortion. WE are fighting for women’s freedom. WE are fighting so you don’t have to (yes, I’m talking to you Mr. anti abortion-until-your-daughter chooses one and then suddenly it’s great that people like me have fought to keep abortion legal). WE are heroes in the war on terror due to the domestic terrorism we are constantly faced with.

I also noticed that the airports waive baggage fees for soldiers. What about abortion providers who fly across states to work in a clinic that has no providers that live locally? Shouldn’t those providers get free luggage check too? What about providers who travel abroad to places without safe and clean equipment for family planning? They should get the same courtesy that soldiers do.

Soldiers also get to go through a fast lane in many airports for the security screening. I’ve been on planes where the pilot will announce soldiers who are returning from war and the entire plane will clap. Shouldn’t an abortion provider receive the same show of appreciation? They provide a vital service and are also risking their life.

When I flew out of an airport yesterday there was a parade of soldiers weaving through the atrium. There was a woman from the USO leading them and waving a flag. There were maybe 200 or so soldiers and the entire airport atrium was applauding them. I think we should try something similar for abortion providers at the next ACOG meeting. Who’s with me?
Posted by Vegan Vagina at 10:15 AM