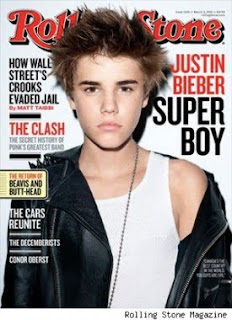 I won't backtrack. Google it if you haven't heard.

I started off feeling pretty down on Bieber. I mean, rape pregnancies happen for a reason? Come now. But I get that Bieber is a young guy. I also get that he grew up in a pretty Christian home and, like most folks, shares the sociopolitical views of his family. I get that he probably doesn't feel the need to lie about his beliefs when asked, and I have to respect that he has his own opinions and blah blah. I mean, Bieber's never protested my PP. But come on, Rolling Stone reporter Vanessa Grigoriadis. Bieber? Abortion? That, I don't get.
Yes, Bieber is a big influence on young people. Did anyone see the little boy cry because "my teenager" didn't win the Grammy for best new artist? Bieber fever is real. Inexplicably so. But does that mean anyone cares what Bieber things about politicized medical issues that have nothing to do with him or his day-to-day? I sure don't, and I listen to "Somebody to Love" several times a week! I have to disagree, Grigoriadis, that a pop culture icon should be asked "all questions". Bieber hasn't ever been on his own. He doesn't have a driver's license. He's just beginning to date, as far as I can tell. And I'm only now starting to hear his voice changing. He's got little or no real-life experience. So why is his opinion on "whatever they have in Korea" all of a sudden so relevant, especially to a magazine that's supposed to be about music? WHO CARES?! His job is to entertain, and as long as he keeps pumping out cutesy lyrics and graceless dance moves then I'm satisfied never to hear another word out of his mouth.
Anyway, listen to Barbara Walters echo my sentiments and simultaneously castrate Glenn Beck!