What does Penn State have to do with abortion? 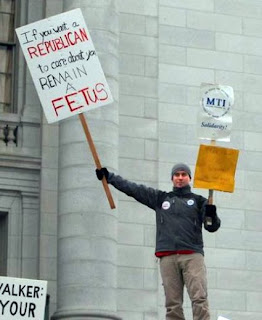 I was outraged after reading about Penn State and how so many people allowed the continued sexual abuse/rape/assault to happen. When I first read the news I had just come off of a 2 week jury duty stint for an attempted rape and sexual abuse case...needless to say rape and sexual abuse and violence have been on my brain. Although, I would argue that our country has a ubiquitous rape culture so I never really get a break from my exposure to these horrific things. I'm not naive, as some of my fellow jurors were, to think that rape doesn't happen "here" or among "these types of people".

So after my first few readings of various media posts about the Penn State "scandal" I shot out an email to my fellow abortioneers. I knew they would get "it" and understand why I was seething. I immediately asked, "what does this have to do with abortion"? So, what DOES it have to do with abortion? PLENTY, as my fellow abortioneers showed me. We live in a place where "life" is valued until birth. Where we spend millions of dollars fighting for the rights of a zygote, but once that child is born we abuse it, ignore it, and forget about it. It is such an obvious connection that it is INFURIATING.

What other connections do you see? How has this news impacted you?

Oh, and reading this made me simultaneously soo soo happy and soo soo sad. I was so proud of this guy that I sent him some love on facebook...just to let him know I was thinking of him...you can too, click here!
Posted by Vegan Vagina at 12:13 PM