I want to piggy-back on Vegan Vagina for a moment here, because I, too, am SO EFFING OUTRAGED about the whole Penn State scandal. Mostly because it reminds me far too much of another pervasive and ongoing scandal that has also been covered up for decades (perhaps centuries?) by people in charge and frequently reported not to be that a big deal. 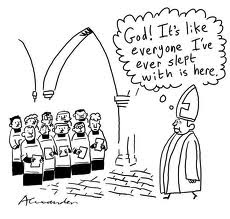 Like VV said, the antis don't really care about kids. This we know, and have known since day one. They are generally the same folks to stand against child protections laws and provisions, and physically demonstrate their apathy by never volunteering to help children, only to make sure they get born. It really strikes a nerve with me because the protesters at my clinic are about 98% Catholic, who stand by the church in spite of confirmed child molestation over years and years and across continents, and who would never protest this behavior because, well, the church is home and it's always been there and why rock the boat over a few bad apples?

Meanwhile, you have losers still holding down the Church of Penn State, even when Sandusky can't be bothered to deny the allegations against him because they are likely true, and McQueary swears he did something about it but won't say just what, and Paterno laments that he should have done more (yes, he should have). But these guys are heros, so what's a little rape and cover-up here and there? They run the winningest college football team ever, LOL!

It seems there are way more antis than just those who protest at clinics. There are lots of folks out there who are anti children, anti family, anti justice, who just can't be bothered to do the right thing, let alone question authority to do it. Why stop at firing the Penn administration? Let's just fire all the antis.