There's no excuse for unintended pregnancy! ...Or is there? 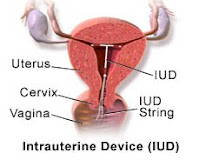 If you're an Abortioneer, an aficionado of public health journals, or if you've watched TV or read a women's magazine recently, you know that IUDs are all the rage. We're moving away from the horror stories of the Dalkon Shield, away from myths like "IUDs are for women who have already had a kid and who only have one partner," and moving toward the realm where IUDs are commonplace, the everywoman's contraception. The thing is, though, I fear that we're also moving toward the place where if a woman gets pregnant, it's her own fault...OK, sure, we're already in that place, as far as the majority of misogynists are concerned, but the place I don't want to be is where the progressive, woman-centered, feminist reproductive health professionals start to believe it.
As I mentioned in my last post, IUDs are still far from accessible and affordable, but we seem to be moving in that direction, slowly but surely. I can see a generation of women who have a long-term, reversible, ultra-effective method of preventing pregnancy. But I can also see feedback such as, "Well, she deserves to be pregnant--she insisted on continuing to take pills when she could have been more protected by an IUD," "*sigh* I recommended an IUD, but she was afraid of side-effects, so now she has another unintended pregnancy," or "With such effective contraception available, that pregnancy was totally preventable."
With every technological advance, there are winners and losers, accolades ands caveats. I just wish that in the case of this particular advancement, there was not the ever-present danger of reverting to putting the onus of prevention on the woman...not to mention the burdens of blame and shame. My hope is that as we, as providers, encourage and educate about IUDs and the like, we don't forget about the condom on a banana instructions and real lessons on fertility awareness--thereby increasing the efficacy of legitimate contraceptive methods, whether or not they're award-winning in our books. In other words, I hope that we continue to respect women and their bodies and their choices, from contraception to termination.
Posted by Desembarazarme at 7:00 AM