I've been enjoying one of my guiltiest pleasures, Degrassi: The Next Generation, via Netflix. Not only do I enjoy the melodrama of teenage life in Toronto, but I was also in search of the missing link: an elusive episode that addresses abortion. This episode (of course!) was not aired in the States, so I was dying to know how it went.

Manny Santos, resident grade 9 hottie, has an affair with sensitive rocker Craig Manning, and becomes pregnant. There was the obligatory misunderstanding during the liaison - he thought she was on the pill, she didn't know she could get pregnant her first time/couldn't identify a condom. Manny's BFF is Emma Nelson, know-it-all and buttinsky supreme. Emma was born when her mother was 15, so of course she is an anti because she knows that teenage pregnancy results in pleasant children like herself. Manny and Craig consider running off to start a little family; Manny is sure that her mom would exile her to the Philippines if she hung around, and Craig wants to repair his own broken home. After more consideration, however, Manny starts leaning towards abortion when she realizes she wants to fulfill all her plans for the future. I don't have a video clip of the throwdown, but it goes like this: 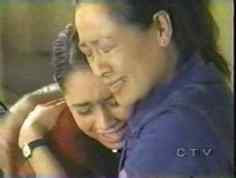 Manny: I can't do this. I thought I could, but having a baby now is just....
Craig: You're not making any sense.
Manny: Someday you're gonna be a great dad, and someday I hope I'll be a mom. But now, now isn't someday yet.
Craig: No. No, you're not. Manny, stop! No, I won't let you!
Manny: Please!
Emma: Craig!
Craig: Emma, you butt out! What she's doing is wrong!
Emma: I agree with you, OK? If she was just some stranger I would be furious with her, but she's my friend. And it's her choice.
Craig: It's my baby!
Emma: In Manny's body; what about her?
Manny: I just...I just...I can't.

Let's rehash my favorite part: If she was just some stranger I would be furious with her, but she's my friend.

God bless that little moral crusader. Emma is just so bright and insightful. She figured it out all on her own that abortion is OK, provided that you actually know and care about the person going through it. It's just so logical!

What Emma doesn't realize, and never will because she's stubborn and a brat and super annoying, is that Manny is a stranger to someone too. Even if you are supportive, someone out there is thinking that Manny is evil and is stomping on her right to choose. But that's cool, because people should only support their friends' abortions? Being selectively pro-choice is not pro-choice! You are still a jerk, Emma! Placenta Sandwich has also addressed this issue on a post referencing the clinic scene from "If These Walls Could Talk". Jada Pinkett plays a friend escorting a patient to the clinic, but is actually stewing in her juices about having to be there.

Granted, I can't blame Emma for this poor choice of words. She is not a real person. But there are plenty of folks out there who feel similarly. I've talked to dozens of them! Women who think that abortion is wrong except when it's herself or a close friend or relative. I exhort those women to consider that all those people outside the clinic, shouting slurs and harassing you or your loved one, might as well be you. Because guess what: YOU'RE STILL AN ANTI.

I think this clip, from the original Degrassi series, handles the topic much better. Lucy, the awesome one, makes my favorite point ever: "So women are just baby factories?" Ah, feminism! TRIVIA: The spiky-haired one is Emma's mom, who admits that just because she is a teen mom doesn't mean she knows what's best for other women. Hooray!

Email ThisBlogThis!Share to TwitterShare to FacebookShare to Pinterest
Labels: Anti-Anti, Antis suck a lot, Degrassi, If These Walls Could Talk, mothers, the patient's friend, TV