Abortion, A Gift from God 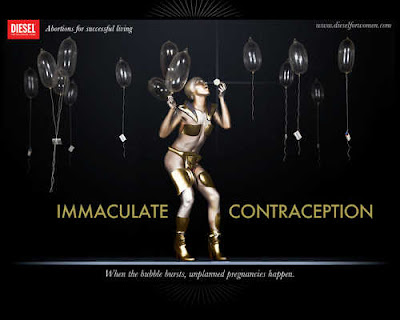 I love the Super Bowl. Really, I do. While the general population curls up to watch larger-than-average men in tights pile-up on a field somewhere, there is a stillness outdoors, a vacancy on the streets, an unlikely but pleasant solitude.
I do also enjoy the rude, anti-abortion controversies that threaten everyone’s chip-dip and light-beer, good times. And by enjoy, I do mean, loath.

No doubt, Abortioneers can appreciate an aggressive, even extreme campaign for change. To prove this, we’ll share an extreme campaign that aims to change the state of pregnancy, motherhood, and (imagine this) working conditions around the world: Mispolis, Abortions for Successful Living.

While the content may be shocking, it is a parody designed to bring light to alllllll kinds of labor injustices. Alternatively, the shocking anti-abortion commercials desecrate a motherly sacrifice and exploit the loss of human life.

The biggest difference between anti-abortion Super Bowl commercials and Misopolis, however, is that you have a choice whether or not you wish to view our recommendation. It won’t appear without warning and it’s aimed at helping women, real women living and breathing on this round earth. Also, working their asses off. Also, having desire.

We know Randall Terry is a deprived man deeply afraid of sensual, assertive women. Just a tad psychotic, just a tad. We know he threatens the lives of every single Abortioneer. A godly devil, if you will, with way too much money and an army of dummies.

We’re wary of such sad beings, such losers, such beasts. But we’re not afraid. We know the world is getting smart.
MISOPOLIS
Abortions for Successful Living
For more information:
Women
on Waves
Fashion Industry Violates Women's Rights
Posted by daughter of wands at 5:39 PM