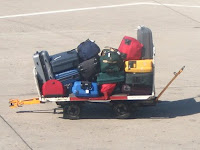 We all come to abortioneering with some type of baggage. It's no secret that I would have an abortion in a heartbeat, no second thoughts, no regrets, no sadness. I've known this since I was 15 or so. And when I counsel women before their abortions, I am as neutral as can be, helping them to work through whatever issues they bring to the table. But I know that a part of me that never shows itself on my face or in my actions thinks, "Is it really that big of a deal?" because it wouldn't be for me. It's not conscious, and again I will stress that it influences my counseling to a negative degree, but I recognize it's there.

I've had a few co-workers who are 110% pro-choice, but in off-the-record conversations, they've admitted that if they got pregnant, they would probably have an abortion, but they wouldn't be happy about it. And these co-workers are the ones who say, "Yes, a woman can have as many abortions as she wants to! No judgment!" but they also counsel about birth control with just a little bit more umph. Because an abortion would be a big deal for them.

And then there are the women who say, "I'm pro-choice, but I'd never have an abortion." Those women in my life don't work at the clinic with me, but I'm curious about ones who do. It would be ridiculous of me to assume that every woman working at every abortion clinic in the world would have an abortion. (Although I'm now picturing some kind of reverse-Margaret Atwood-style novel about a world that's so pro-choice, women are required to have abortions just to prove that they mean it.) I think most of them would at least allow for cases of fetal anomaly or rape, but who knows? Readers, are any of you or your friends Abortioneers who would NEVER have an abortion yourselves? And if so, what do you bring to the table? Because I'll bet it's also a pretty amazing contribution.
Posted by Desembarazarme at 9:12 AM