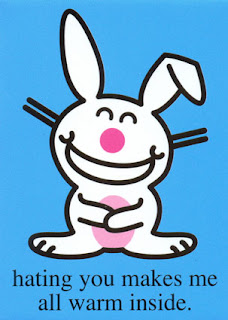 At the clinic where I escort, there is just the sweetest little anti you ever did see. Curly hair, freckles, a tender voice. She might be picking posies with a basket on her arm, save for the literature in her left hand and the rosary in her right. She greets all sidewalkers, anti and escort alike, with a honey hello, and bows her head in prayer.

She makes me crazy.

Harmless though she and all the other well-wishing antis may seem, I rarely if ever return their pleasantries. The nod of recognition is more than sufficient. It manages to say "Oh, there you are" and "Back the shit off" with a modicum of effort. Two birds, one stone.

I've been noticing some of the veteran escorts getting mighty friendly with the antis, in a slap-on-the-back, aren't-we-the-odd-couple kind of way. The only explanation I can find is that immersion therapy has rendered them indifferent, if not receptive, to the conversation that occurs on the sidelines. I'll admit that dull moments arise in that four-hour span, and it might be a larf to reminisce over the past 15 years of enmity ("Remember that time you published my picture in your Christian magazine as the 'Gatekeeper to Hell'? Classic!"). I, however, could never go down that road. I will never forget Strawberry Shortcake's true purpose.

One Autumn morning, she was manning her post on the sidewalk, having made the trip across town bright and early and eager to save lives. She approached the biggest man I'd ever seen to offer him a rosary and some "information" about how he can be a hero. Either he had woken up on the wrong side of the bed, or he was annoyed by her failure to realize that he wasn't having an abortion that day, but he was not amused.

Still, my initial shock was soon replaced by concealed giggles. Now, I would not have screamed that at that girl, mostly because I would never talk to her in the first place. But boy, am I glad he did. Isn't it what we're all feeling, but we just won't say? Isn't it something they need to hear now and then, if not every minute of every day? So I say to all antis, kind and mean-spirited alike:

Kindly fuck yourselves. You are just awful.