Coming Out: I'm An Abortioneer 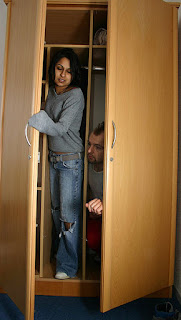 I've been doing this work for many years, but I'm still not at the place where I "out" myself as an Abortioneer to everyone in my life, all the time. And I'll admit: sometimes I feel guilty about not doing so. Sometimes I analyze myself, trying to figure out why I don't tell everyone; why I don't add certain people from my past on my Facebook; why I block access to my profile to even others on Facebook; why I don't just openly answer the question, "where do you work?" when anyone asks.

I'm proud to do this work. At the same time, I'm very aware there are some extreme "pro-life" freakazoids out there that feel so strongly about abortion, that they'd quite happily make sure we're (all Abortioneers) wiped off the face of the planet. I happen to live in a conservative place and I just don't know what I'm going to encounter at any point in time when I "come out." Still, I mostly have positive experiences when I say where I work. (Positive = no jeering or creepy stares like "I'm gonna get you" or big abortion debate.)

Recently, I spent time with a friend whom I've known for nearly 20 years. It became evident that I pretty much had only told him about the family planning and STI services at our clinic. When I was complaining about our protesters, he was incredibly confused. Certainly, throughout the 20 years of our friendship, I must've - somewhere - somehow actually TOLD him we did abortions! I HAD NOT! I was a bit mortified. (With myself.) So I came out. "We do abortions," I said. Not too shell shocked, he just said, "I thought you took care of infections here." I said we did and that was true. Slightly desperate, I asked, "Haven't I told you before? I've really never told you? Straight out?" Blank stare, "Nope." This friend and I had grown up in the same church, the same religion. I was a bit worried it might be the end of the road in our friendship, to be honest. Instead, as he sat in my office and eyed a sample Nuva Ring, he was just like,"Um. What's THAT?" So I explained. Then he saw our pretty basket which holds our abortion instruments to show women when telling them about the procedure. "What are those?" I explained. And I became keenly aware that Abortioneers' office spaces are *not* typical office spaces! Next, a barrage of abortion questions: how far along can you go; what's legal in the US; how is it done; how often do you do them; are you doing them right now; how many a week do you do? I was shocked. He wasn't mad. I think he's still my friend.

I know I just need to get over myself and be more open, generally, about my work, despite living in a conservative community. Or maybe I don't. I'm still not sure. I suspect I'm not the only person out there that sometimes experiences trepidation when outting themselves as an Abortioneer. Maybe you can share some of your thoughts, stories?

Email ThisBlogThis!Share to TwitterShare to FacebookShare to Pinterest
Labels: About A Girl, being an abortioneer, coming out, disclosure, I'm An Abortioneer, outing myself, Outting myself, talking to strangers