My father the reluctant pro-choice hero 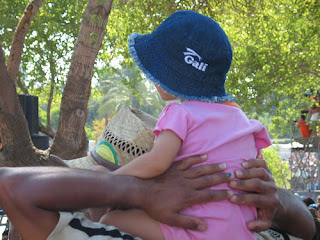 I suspect my dad never meant to raise a pro-choice feminist. I wonder if he had no idea what he was in for when he had a daughter. He often seems taken aback by my opinions if I don't ease into them or don't take a mild tone defending them. He's uncomfortable with abortion -- knows it's necessary in some cases, but wishes that someone else's daughter were doing the dirty work of "facilitating that." For a while, he seemed outright sorrowful that I had chosen this field.

But I must have gotten these values from somewhere. It always just sort of made sense in my head that it came from him and my mom. The particular differences of our family have always made me appreciate openmindedness and strive to respect others' background and situation. My parents value justice, rights, the common good, public health, and medical truth-telling. And it's because of them that I have always tried to understand all aspects of a person's narrative -- more than is probably possible. So I don't feel bad or wrong when my dad doesn't see it my way -- just sad -- because I know that he knows we are starting from the same values. And finally, in the past year or so, he's stopped asking if I'm considering changing specialties, and started acknowledging aloud that I've found a calling of sorts.

And yet! Even though we've reached a point where he seems to accept the stories I share with him as good-enough reasons to continue my work, there are certain things that he doesn't seem ready to let go of. Not so surprisingly, they seem related to him as a man, as a father or a potential father:
1) What if a minor has an abortion without telling her parents? That's wrong, and therefore "parental consent" laws are good. I would want to know if my daughter were pregnant or seeking an abortion, and it's my right as a parent to be involved in her medical care.
2) What if a married woman has an abortion without telling her spouse? That's unfair to a husband, particularly if he has wanted a child, and therefore wrong, and therefore there should be a law against it. I would want to know if my wife were pregnant or seeking an abortion, and it's my right as a potential parent to have a say in what happens to my potential child.
Compelling hypotheticals, but I'm forced to disagree with him every time. The number of negative situations that could be dangerously exacerbated by parental consent or "paternal" consent is so overwhelming, and so non-hypothetical, that I just can't abide by the argument that we should pass coercive laws based on the assumption that all families/couples have healthy relationships. It's not just that, fundamentally and morally, abortion is not up to a parent or partner's decision; it's also that women and girls may very well die if we let it be someone else's decision to make. Remember the 13-year-old in Pennsylvania who was hospitalized this month, because she induced an abortion with a pencil rather than comply with her state's parental involvement law. Daughters get kicked to the curb or worse for being pregnant. Adult women get shoved around and beaten up and their abusers threaten their children or pets, all to keep them under control, and impregnating a partner (child or adult) is a sadly common weapon to ensure she's stuck with him.
That's why, if you're a parent (or partner), the onus is on you to make your relationship with your daughter (or partner) one that she knows she can trust for support in making difficult decisions, and then hope that she decides to share that part of her most private life with you. Like you're supposed to do in your relationship in general, for everything. Ensure in advance that she always knows you are there for her, for any eventuality, whether or not she'd choose what you'd choose -- like I know my dad is. That's really all you can ethically do. If you're already doing it, I thank you from the bottom of my daughterly heart.
Posted by placenta sandwich at 9:21 AM