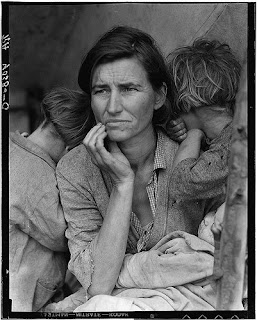 Dorothea Lange: "Destitute Pea Pickers in California. Mother of Seven Children."
This weekend I was back at the clinic for the first time in a while. I thought I'd ease right back into the routine, but it didn't go that way. The one good thing about having to get back up to speed is that you're doing everything very attentively. Yes, it slows you down, but that also makes you appreciate everything a little more.

"Holly" checked in to get an IUD inserted. While she waited to be called for the exam and insertion, we made small talk about the Mirena and the Paragard. She said she'd had an IUD before, when her husband was still alive, and had "LOVED it!" But when it expired after he died, she didn't get a new one, and eventually became sexually active again -- this time using what she called "the Pull-N-Pray method" -- "...but Praying didn't work so good," she finished. So she scheduled an abortion, and after it was over she wanted to go back to a more effective method (99.3%, to be specific).

Later I heard her in the waiting room, talking with some of the other clients -- about their abortions, about losing her husband, about methods of birth control. It sounded like a discussion group, except it had formed organically, one woman reaching out to another. It never fails to feel warm and fuzzy when I notice something like this.

The effect of Holly's open, good-humored demeanor stayed with me as I tried to help a couple of women in the unfortunate position of not being able to afford their abortions. I'll tell you about "Regina," who had brought the right sum but was farther into her pregnancy than expected, so after the ultrasound she found out her price would be higher. And she lived two hours away from the clinic. Going home to scrounge up more money would mean having to reschedule for another day, find another ride, spend another $60 in gas.

So I talked to her about what she could dig out of the car's cup-holders, or how the friend who drove her might be able to help. We drew charts of how many days were left until she would go up to another fee bracket. We tried to match that up with which days the driver could drive, which days the babysitter could babyit. We divided the number of dollars missing by the number of days left. And the two of us spent a long time on our respective phones, trying to see if outside funding agencies could help out.

When I got a promise of some funding assistance, I found Regina in the waiting room to tell her the good news -- but it wasn't good enough news. "With this added help, you're now only $40 short," I said...but, of course, $40 isn't really "only." She said all she had left in her bag was the $30 she would need to get home -- because the fill-up at home had cost that much, and now they were at the bottom line of the gas meter. And she said something that I realized I hear all the time -- I have three kids already, and if I have another one I won't be able to take care of them the way they deserve. But it's so hard to save up money when you're raising kids, and that's why I couldn't come in to do this four weeks ago like I wanted to.
And it breaks my heart when a woman tells me she knew the price would increase soon but was powerless to have her abortion any earlier, because she's been trying to scrounge up funds for so long. Believe me, I get heartbroken so often.
The end of this story is that Regina did manage to pay the last bit of money after speaking with the friend who drove her. (If she hadn't, we probably would have begged our manager to allow an IOU.) But in a better world, she would not have had to wait hours for treatment while we sorted out money details. In a better world, her kids' quality of life would not have depended on whether her ride could put off his own bills in order to loan her some money.

...And, for the record, in a better world advocates for women would not have to be swearing up and down to the rest of you that expanded health care access will NOT expand abortion access, in a sick fucking trade-off between women's health and, well, women's health. Just saying.