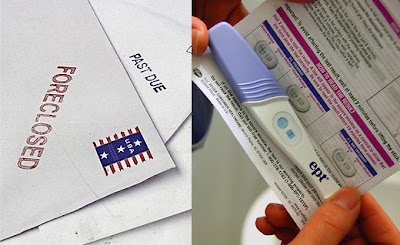 You know how MSN and AOL have those little article blurbs on their front pages, Top Cities To Live In, Toddler Saved By Squirrel, Study: Men's Brains Are Bigger Than Women's? The other day there was one called Ten Ways NOT To Find Money In Troubled Times. Well, I read it -- probably because I have a peverse sense of curiosity, and I speak to a lot of pregnant women who need Money In Troubled Times.

Sadly, but not surprisingly, most of these Don'ts are suggestions that I have to give to women every day.

Or, OK, half of them: Cash Advance On Your Credit Card (if you have a credit card); Tax Refund Anticipation Loan (very popular right about now); and the old standbys, Payday Loans, Car Title Loan, Pawn Shop. Yes, the terms are very unfavorable to the person asking for money. They are unfavorable because you will get the money right away, and the payer knows how badly you need the money right away.

A couple are things I had never thought of: Cash In Your Life Insurance; Gold Parties. Apparently "gold parties" are like a reverse Tupperware party -- someone hosts a get-together, and you show up with all your gold, and they give you too little money for it.

And the remainder are things that pretty much wouldn't apply to the situations I am talking about, things that are almost laughable: Loan on your 401(k); Home Equity Line of Credit; Break A Certificate of Deposit. Just in general, if you can afford to save after you've shelled out for basic needs each month, you can probably afford an abortion. I mean, there are exceptions: if you were, say, 28 weeks pregnant or in very fragile health, you might have to be treated in a facility that charged five thousand or ten thousand or fifteen thousand dollars. But most of the time, I mean.

So anyway, I love how even when a woman finds help paying for her abortion thanks to an emergency-funds organization, we use the language of "responsibility." We remind the woman that the Women's Medical Emergency Fund of Springfield (for example) will be assisting with $50 of her fee today, and she is responsible for the remainder. Well, of course she is; but we sort of glibly toss this word at her that probably means a whole hell of a lot more to her than it does to us in this second.

A pregnant woman experiences the word responsible in so many ways at once. She should have been more responsible than to get pregnant in the first place. You shouldn't have sex unless you're prepared to be responsible for a child. She'd better be acting responsibly toward the unborn child everyone assumes she will be carrying to term (no drinking smoking cursing fucking...). And now, she is responsible for the remaining (approximately, for a first-trimester procedure) three hundred and fifty dollars of her abortion fee.

If only she had read Eleven Ways To Find Extra Money NOW! Then she would have known to join Netflix, stop paying for cable, host dinner parties at home instead of going out with friends, and sell her poorly-performing stocks. Yes, really: the way to find extra money is to spend too much money on things you don't need, then STOP spending that money. Voila, free money! Duh.


Posted by placenta sandwich at 11:21 PM