Reserving all the judgment for ourselves 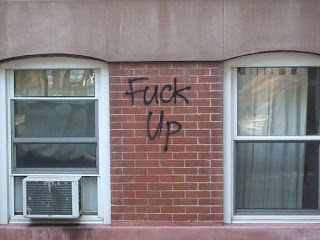 You know that saying: the best-laid plans of mice and men go oft awry? Well, because of our extensive experience with the going-awry, many of us abortioneers have pretty firm ideas of safer sexual practices, and some of us might have a certain trepidation about using anything other than "highly effective contraceptive methods" (see here for a ranked chart of options and explanation of its use in contraceptive counseling).
At the same time, we all spend our days hearing every version of sexual history under the sun, and recognizing that women are not evil or dumb or fuckups when their practices or situations diverge from our own. We counsel clients about methods that are easier to remember or longer-lasting or invisible to an abusive partner; we brainstorm with them about ways to approach a partner about getting testing for STIs, condom negotiation, and respect for boundaries; we remind them about transmission methods of various infections and how to treat or manage existing diseases. We don't scold or scoff. The words "stupid" and "crazy" and "irresponsible" may exist in the world outside our walls, but not in here.
But have you ever seen what happens when WE fuck up?
This weekend I had a crazy, stupid, irresponsible experience: unprotected sex. The first of my life. I've been with my partner for ages, but we hadn't had sex in quite a while, and -- it seems crazy but -- somehow this time protection just slipped my mind. And afterward my partner asked if I had gone back on the pill, because he'd been expecting me to pause for condom-time but then I didn't. OMGWTFBBQ, said I. How can someone spend years and years trying so hard to avoid pregnancy, working in the world of unplanned pregnancy, and devoutly practicing protection habits -- then just FORGET? Needless to say, I was about as embarrassed and irritated at myself as your average patient who sheepishly tells you her story of one night of abandon, or one vomited pill.
Well, I headed right to my medicine cabinet, looking for the pack of emergency contraception that I obtained nearly four years ago and set aside for just this purpose -- or more likely, I thought, for some friend who had a more unpredictable social life and might find herself unprepared. Ha. What was that I said about best-laid plans? I couldn't find the pack! I've moved three times since I first picked it up, and it must be in a box somewhere. So I texted a couple work friends, thinking they were likely to have a spare too -- but they didn't, and our clinic is closed on Sundays so it wouldn't be a snap to get it for cheap or free. No problem: I'll skip down to the pharmacy and buy it over-the-counter---Holy shit! I forgot the full price was fifty dollars. And my insurance doesn't have any coverage for non-prescription meds.
It's so weird being one of the hoi polloi, the everywoman who faces everyday obstacles and needs to decide if she can afford to protect herself and has to deal with an awkward pharmacist. And really weird realizing I'm judging myself for being "such a dumbass" when I would never think that about someone else.
Later that day, I heard from a friend:
um, how much do you know about herpes?
i engaged in some high risk irresponsible behavior last night due to drunkeness
ughhhhhh
i feel like i need to kick myself out of my [sexual-health-related occupation]
My god! We all make mistakes sometimes, and here we are feeling like something is deeply wrong with us -- like we don't belong in the profession! -- now that we have joined the ranks of those who "should have known better [but presumably didn't]."
Well, good thing it was my turn to blog, said my friend:
write about how we in sex/repro health expect ourselves to be models of responsibility and healthy sexuality
but get down on ourselves when we slip up
you can talk about your plan b
and my herpes!
Well, there you go. Turns out this unpleasant incident was a good reality-check: it only takes a weird moment of forgetfulness and some bad luck to end up in the patient's seat or the pharmacy, and I must have had some unacknowledged belief that I was "too smart" to wind up there, or maybe "too smart" to get a pass on making a mistake.
I know some of us have had the good fortune (so to speak) of being in a "dumb" situation early on, and having lots of compassion as a result. If you'd like to tell that story, please do so in the comments...and I promise I won't think you're stupid!
Posted by placenta sandwich at 9:38 AM