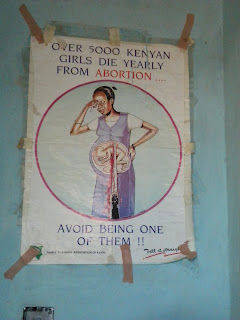 I visited a semi-rural reproductive health clinic in Kenya. Impressive! My org has done a great job recruiting talented clinic staff and outreach counselors to give women accurate information (save for one glaring translation typo!) and quality services that I myself have utilized. They even have a system for providing affordable services to women who would otherwise not be able to afford prenatal care or birth control. I donated anyway; do you know how far a measly few dollars goes??

I sat and discussed patient issues with the provider at one clinic: how many IUD insertions he completes in one month (a lot); how many women have them removed (none); how many women/babies had been lost during delivery (only one woman, due to a surprise post-partum hemmorhage). Naturally, I asked - knowing the answer in advance - if he had ever performed an abortion. He had not. But he had seen a handful of women who had sustained injuries or illnesses from clandestine abortions. Every village has its man or woman who has abortion secrets and serves dozens of women in the community. Injuries happen frequently, he explained, though few women present for treatment because they are a) afraid of being punished, or b) dead already. These village practitioners use herbs, potions, sharp objects, the usual. Of course, we in the "developed world" know how dangerous these methods are (right?), but by the time a woman actually presents for treatment from such complications her condition is more dire than this comprehensive, yet limited, clinic can accommodate. The provider sends those cases to the area hospital, many kilometers away from his clinic, down a dirt road with a heavily worn surface that makes for a very uncomfortable, perhaps deadly, ride. The provider was excited, though, about the advent of MVA in the developing world. He had never performed an abortion, nor had he been trained in the technique, but he was optimistic that rural women would be able to receive safe abortion care (where permitted) in low-tech environments without issue. However, he lamented, MVA can only do so much for botched procedures and life-endangering cases. Alas.

Kenya passed its new constitution within the last week, including some controversial language about abortion. This was the subject of debate for months, rife with anti-abortion rhetoric and TV infomercials akin to clinic-protesting signs (yuck). And I just hope that clinic providers like my guy above can band together to, at the very least, uphold the life endangerment clause. I have my doubts however; a female doctor in one of those anti commercials described, in her "medical opinion", that abortion is a "senseless death". I guess having a new perspective helps me appreciate the way things are in the Nifty Fifty.

It's a long road ahead, for all of us.