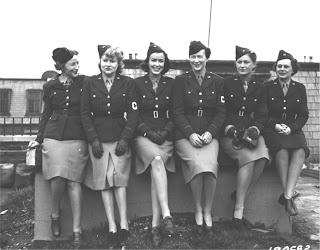 In the wake of all this anti-woman sentiment that’s been blowing around the last few years, the public has started to take notice of the plight of enlisted women in the armed forces. Entrenched in a nearly all-male environment, women have been victims of discrimination and violence since they were first allowed to serve during WWII. Women have not been allowed to fight in combat with men; they do not receive coverage for abortion under military health plans, nor can they receive abortion services in military health facilities. Most egregiously, they are frequent targets of sexual  violence by officers and fellow enlistees. I take that back; the worst part of all is that complaints of sexual violence are rarely taken seriously, assuming a complaint is made in the first place. Most cases go unreported, for fear of retaliation or punishment.

That’s right. In the US Armed Forces, you can be punished for being raped. It sounds like something that might happen somewhere far away, like the woman from Morocco who killed herself after being forced to marry her rapist. But nope. This is happening right here at home. It would surprise me, but little does these days.

I first learned about this phenomenon a few years ago watching The Coathanger Project, in which a former soldier told her story of being dishonorably discharged for having sex and then attempting an abortion. More recently, I watched The Invisible War, a documentary about women enlistees (and some men) who were raped, even drugged and beaten, and received no help from those in charge. They were slut-shamed, victim-blamed, or plain told to suck it up. When a group of victims brought a lawsuit against the military for mistreatment of them and their cases, it was dismissed on the grounds that sexual assault is an occupational hazard of being enlisted.

Gag me with a spoon.

If you haven’t seen the film, DO. I can’t remember the last time  I was so angry, so if you’re interested in draining yourself emotionally it’ll do the trick. One issue that wasn’t addressed in the film was the what happened to those who became pregnant as a result of rape (which can happen!). As we know, you can’t get an abortion with military funds or in military facilities, so I’m sure those people have quite interesting (and horrific) stories to tell. But I suppose that would become a six hour movie.

You know, I’ve gotten lots of flack in my life for not loving my country as I should. For threatening to move to Canada if Bush was elected. For not buying that the military has anything to do with protecting my freedom. For hating American flag  and “Support our Troops” bumper stickers. For questioning why our defense budget is out of this world but we can't feed the poor. For not identifying as a patriot, because being a patriot these days apparently means toting a gun, driving a big car, and popping off firecrackers in a South Carolina rest stop in a "USMC" t-shirt. But the reason I don't love my country as I should is because, call me crazy, I believe in an America where women are treated as equals. Where they can fight alongside their brothers without fear of incest. Where they can love their country so much that they'll die for it without feeling unsafe around the people who supposedly keep us safe. Support our troops? Not as long as they're raping our other troops.

Look, I have lots of thoughts on this, but sadly I don't really know what I can do except stand together with victims and support reform in the military. I think some minor changes are happening (better moves than these god-awful posters, and these, and these), but I'm pessimistic that nothing will change on a large scale until misogynistic looneys are six feet under. I guess I just want to raise awareness, and give readers the opportunity to learn and pass on their learnings to others. Talk about it, make sure that people understand why this is such a problem. And pray not only for our troops, but for the sad, angry place this country has become in hopes of REAL security and freedom.
Posted by anti-anti at 1:30 PM