When is enough enough?

I remember back in 2008 when some reporter dared to ask Sarah Palin if she was a feminist. I'm pretty sure she said yes, and came up with some jibber-jabber about how just because she's anti-choice doesn't means she's anti-woman, and how the Republican party can actually become the Party for Women.* I think around the same time, John McCain's heavily made-up daughter made a similar plea for women to look to the Republicans to fulfill all their womanly needs and desires. For a while it had seemed, for better or for worse (and likely for the worse), that Republicans wanted to reach out to women and improve their lives. Yes we (Republi)Can!

Fast forward four years, and I can't believe my freaking ears with all this hateful, anti-woman speak being tossed around. And I find it hard to believe that Todd Akin, Steve King, and others are simply so bad at politics that they can't control their verbal diarrhea. I think these people REALLY BELIEVE the nonsense they're promulgating, and it frightens me. I'm scared to think that if I were raped and went to my local congressman he might tell me one of the following: a) I wasn't "legitimately" or "forcibly" raped; b) I can't have an abortion in the event that I become pregnant; c) but don't worry, because when a woman is raped her body has mechanisms to "shut that whole thing down". Maybe I could at least take my story to King, who has never heard of a person getting pregnant through rape, because he's "open to discussion" about that kind of thing. WHAT'S TO DISCUSS?!?!?! 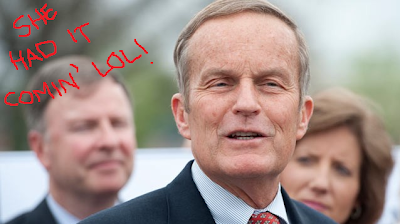 So, I remain thoroughly unconvinced that the Repubs are a party in any way responsive to the needs of women. When you try to tell someone about one of the most serious issues affecting women since the beginning of time, and they don't believe you, then we're dealing with some serious troublemakers. I can't believe any woman would be a Republican after this. All kinds of women get raped, regardless of political affiliation. I hope the women on the right are doing something about this, because the men sure seem not to give a damn who does what to you. I can't believe they're driving me to this point, but I'm starting to wish these neanderthals would face assault. Maybe not "legitimate rape", but just a good fondle would drive the point home of how horrible it is, even without having to deal with the whole pregnancy thing.

*Now that I think about it, SP did charge women for their rape kits in Alaska, right?