If you haven’t heard yet, Mitt Romney has selected his running mate: Wisconsin congressman Paul Ryan. He is a great choice - if you’re wealthy, white, and male. Otherwise, fuggettahhbouttit. 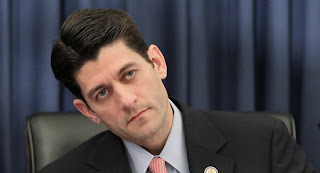 Let’s review some key facts about Paul Ryan as they relate to his views on women.

But really, I should just let him speak for himself:

“I’m as pro-life as a person gets . . . You’re not going to have a truce. Judges are going to come up. Issues come up, they’re unavoidable, and I’m never going to not vote pro-life.”

!!! Okay then. Since there's no "trucing" on women's rights issues, the only thing that we can hope for is that Ryan's extreme views will turn off moderate Republicans, independents, and all women everywhere. (Besides the fact he is completely unsupportive of gays, minorities, students, seniors, the environment, etc.)