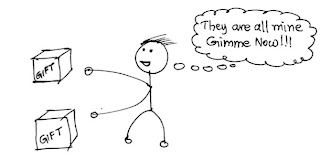 Recently, Revolutionary Vagina wrote this post asking what our bias(es) is/are. I really get annoyed with pro-choice people who get all judgmental on women; but I'm going to admit that I get all judgmental and frustated when clients are/seem: ungrateful.

I especially get frustrated about this when it comes to helping patients come up with funding for abortions, finally obtain it, but then they seem really snotty and ungrateful about it all, demanding more money. In my experience, it's the women who needed the least amount of funds from outside sources that get the most uppity about it (for example, the 25 year old woman who could've come up with all of the funds in a pinch, had financial and emotional support from a relative and a friend on the day of her abortion, but was pissed off she didn't "get more" money from the fund. Her inability to get more money from the fund meant she'd have to pay back her friend and her relative. And she didn't want to do that. So she was mad and called the fund employees and clinic staff lots of fun little names that I won't repeat here).

Why does this piss me off? Because it seems like ingratitude to me. Funds don't have to exist. They exist to help women. They work hard to raise money to have an abortion fund. Most fund workers are volunteers and out of the kindness of their hearts, are giving back to women seeking abortions. Women don't have to utilize the funds and the funds don't have to help them pay for their abortions, either. There are women out there doing crazy ass shit to pay for their procedures. Women who don't have a home, don't have a job, no food, their partner just got shot, and are living in circumstances very much like women live in developing countries; only they live in the US. Some of the crazy things I've heard women have to do to pay for their abortions:

Women shouldn't have to do this. I believe their abortions should be free - probably like most patients - and I get why women get frustrated that Medicaid in their state won't pay for their procedures. It pisses me off, too. It's unfair. Yet when I'm talking to a woman who is one of the lucky ones who can come up with the balance not raised by funds (without having to put herself in any risky/dangerous situation), and it's been explained to her that the $100 she has to pay the clinic will allow at least one other woman to have her abortion, yet she still doesn't care and still throws a tantrum, then I get pissed.

Thankfully, nearly all the women I've ever had the honor (and I mean that) of working with to help them with their abortion procedures, have been gracious, kind, very grateful, and warm. Rarely, a bad seed comes our way. I shouldn't even focus on it, but: it's my bias, the thing that gets me frustrated at times.