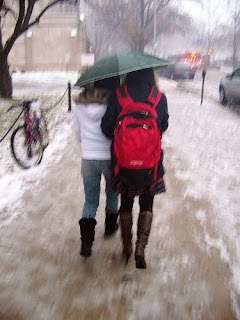 this is how I feel while counseling

For the last several years one of my guiding principles has been that you should do what you're willing to do that others are not. That's one reason I keep doing jobs that sometimes seem inconveniently "controversial", and tasks requiring talents that don't come naturally to me. For example, I'm good with policy and analysis and not as strong in what they call "interpersonal intelligence," so counseling strangers sort of drains me even though I really value it. Sometimes for motivation I have to remind myself that there aren't enough abortioneers in the world for me to slack off.


This weekend I was so tired and couldn't believe I'd signed up for another clinic shift. If only I could sleep in this time. But I went to work and ended up spending half the day with a woman who felt she would understand her counseling session better if she had an interpreter. Her English was not great but it was decent, and her other language was one that I speak but am very self-conscious about; I felt disappointed to have to interpret. But over the next hour she opened up to me about the things she hadn't been able or willing to tell her other counselor.

She and her three children joined her husband in the US less than a year ago. Before moving, she was a foreign-language teacher; now she has to pass an ESL class in order to get certified to teach here, which seems kind of silly. She wasn't happy about having an abortion, but said it was the right thing to do because she's barely able to keep her three kids safe and happy right now; they're pretty young, and she doesn't know anyone in her new town. Have you ever wanted to give a client your phone number and tell her to call you for anything? My husband brought me and the little one here today, we had to leave the two older ones at home alone, and I feel scared about it. A mother shouldn't have to do that, she said. Back home I would never do this abortion -- there's so much family there to help with kids and share hard times. She hopes to have more children when things become more stable, so she had a lot of questions about abortion's effect on her future fertility.

I was really anxious today, but now that I'm talking to you I feel really relieved. I'm so glad you could speak with me. At those words I realized I was going to stay at work until her procedure was finished and her husband was back to take her home. She was stoic during the long wait, the cold pre-op room, the procedure -- her lips pressed together, her fists tight near her chest until I offered my hand -- the final ultrasound check, the cramping recovery. In the recovery room she asked me about medical complications, asked me if abortion is legal here, and told me how her religion accepts abortion in the first 40 days of pregnancy -- Before that, it's not a person, it's only blood. We squeezed hands again before I left the room and she said God bless you, really, God bless you in two languages.


Some people aren't comfortable with what I do -- including my parents, who visited me this weekend and had asked me to get my shift covered so I could spend more time with them. My dad used to ask about twice a year whether I was planning to change fields. He would say, why don't I spend my energy working on contraceptive use instead? Well, having the power and tools to prevent unwanted pregnancy is fantastic, and my job does include contraception services. But I won't consider leaving Abortionland as long as abortion services are still needed and abortioneers remain too few. Being in the right place at the right time to make someone's clinic experience more emotionally bearable is worth the social inconvenience, the missed Saturday sleep, the questions from family. I can't really complain.
Posted by placenta sandwich at 8:05 PM