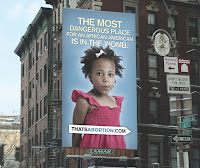 Many of us heard about these billboards popping up in Georgia last year, Anti Anti, , Vulva Flower and I wrote about the racist bill boards reading "Black Children are an Endangered Species. I had not heard about any more of these offensive bill boards until now. The Life Always group recently unveiled another equally offensive bill board last week. However, there is victory according to this blog the Women Of Color Policy Network announced that the bill board would be taken down immediately.

This newer bill board reads "The Most Dangerous Place for An African American is in the Womb" This message is so appalling I almost don't know how to respond. Do the folks who put this together take modern day manifestations of racism into account at all? Black men and people are still routinely harassed by police for simply being black, Black people are still being incarcerated at an insanely high rate for non-violent crime, and even Wikipedia knows that race and poverty are linked, poverty rates are much higher for people of color than white folks. So the point is if the people funding these bill boards, Life Always, are so concerned for the well being of black folks it sounds like there are a lot of ways redirect there energies and actually work towards dismantling systemic racism in the United States, its rampant.

I'm glad this bill board was taken down. I have heard rumors that similar bill boards were removed in Atlanta but remain up in other parts of rural Georgia. A writer from Colorlines identifies several reasons she hates these bill boards but makes the point that they have motivated women black women to come together across class and religious lines. I also hate these bill boards and I hope that blatant racist disrespect of black womens' lives and choices motivates women to voice their support for reproductive rights and choice.