Sigh of the week: "With Liberty and Justice for Most" (In which I try to play well with others) 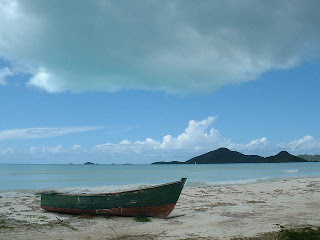 So I wanted to write you a little post all about Plan B and ellaOne. There is good news and bad news, about that. The good news is, I spent this weekend at a little surfing beach on the Pacific, complete with fishing boats and coconut at snacktime and very little internet access. The bad news is, there are no carefully-explained, well-researched blog posts to be had around these parts! Only chilled beers and split coconuts, it turns out.

So, sorry. You can read all about emergency contraception here soon, I promise. In the meantime, do check out NYCProchoiceMD's super post at abortion gang about mostly the same topic.

Today, a burning question: Am I the only one who's had bad experiences with libertarians?

You know, I get that libertarians supposedly value individual liberty above all else, even to a fault -- for example, to the point of denying responsibility for the suffering of many individuals due to collective oppression, or to the point of forgetting that the roads they drive on are paid for by taxes -- uhm, et cetera. But what's so interesting is that, given those values, some libertarians still (1) introduce themselves to me as "libertarian" [not normally of external prompting] and then (2) dare to tack on "...except for abortion."

This has happened to me multiple times, in inappropriate contexts -- like the noisiest bar I've ever been in, or a mutual friend's house party. Actually, I don't even think I've met libertarians who DON'T make exceptions to liberty when it comes to abortion. It's like, I'm minding my own business, maybe making small talk or waving down a bartender or trying to avoid secondhand smoke, and then some dude (it is always a dude!) decides that "I'm a libertarian" is a good conversation item, and then that "except for abortion" is totally consistent and sensible and not at all likely to provoke a negative reaction, and then what? Well, then I'm faced with the perpetual shitty choice:

A) Have a whole long conversation (they are always long!) about how no sense is being made, in which the dude will never attempt to understand the point of view of someone else (which shouldn't be a surprise because, hey, libertarian!), eventually leading me to despair of ever being able to meet a stranger normally like normal people do;
B) Let him say whatever he wants to so I can get through the situation with a minimum of time wasted;
C) Tell him I have a policy, ever since a few years ago, of generally not talking to "libertarians" and definitely not talking to "anti-choice libertarians," and try to gently leave.

After enduring too much heartache with strategy (A), I've moved on to (B) and (C). But recently I've acquired this temporary neighbor, who I know will be easier to get along with if I don't shut down on him. And he's perfectly nice most of the time, it's just: I'd be lying if I said I didn't cringe when he revealed a few weekends ago that he identifies as a libertarian, and I'd be lying if I said I haven't been avoiding the subject of abortion ever since because I don't even want to deal with the part where he might turn out to be anti-choice.

On the other hand, he's quite young and not from where I'm from and maybe it's not all his fault and potentially at this point I can/should afford to give him a break, or a chance to learn better, rather than avoid it entirely? But ugh, what a drag that is. Help, what do y'all think?

In exchange for your advice, here's a ridiculous picture I found: 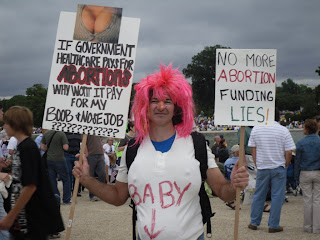 (saw this in the Washington Independent)

PS: I recently told someone else I was an abortioneer -- after watching my first episode of "Sixteen and Pregnant" (very harrowing!), hah -- and he took it fine, we are even totally friends I think. Score one for notdouchebags!

Posted by placenta sandwich at 9:10 AM

Email ThisBlogThis!Share to TwitterShare to FacebookShare to Pinterest
Labels: advice time, being an abortioneer, coming out, disclosure, I'm An Abortioneer, libertarian douchebags, outing myself, placenta sandwich, talking to strangers