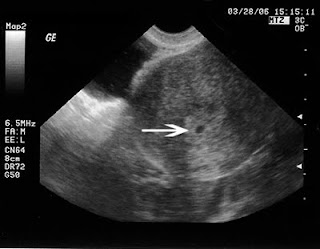 Happy Fathers' Day! I was going to write you a post about dads, but it'll have to be tomorrow, because I got distracted by an entirely different kind of paternalism. Today I'd like to direct your attention to this post at The Curvature: Anti-Choice Ultrasound Laws Don’t Change Abortion Rates, But Continue Getting Tougher. It's about the wave of state-level legislation that's been passed in the last year or so, much of it having to do with forcing a woman to pay for a medically unnecessary ultrasound, look at it, and/or hear a description of it from the sono tech.

Now, many clinics use ultrasound as a way to determine at what point in the pregnancy the abortion is going to be performed -- there are important technical distinctions between, say, six weeks and sixteen weeks, though ultrasound is not the only way to figure this out -- and I'm all for patients having access to their own medical records if they want it. However!

(a) There is really not that much to see on a sonogram that's made for the purpose of determining gestational age. The screen is pretty dark, the image is fuzzy, and 90% of abortions are performed in the first trimester, a time when all the print-out shows is a roundish grey blur.
(b) Instructing, as some laws now do, that the technician must turn the screen to face the woman but the woman "may avert her eyes" is pretty ludicrous. So is the idea that a woman averting her eyes must still hear the doctor or tech "describe the fetal development at that stage" (no provision for "averting her ears" in such laws!). If it's in some way relevant to care, a doctor should -- and would -- explain this sort of thing. If it's not relevant to care, well then, it sounds to me like legislators are trying to alter medical practice for political purposes, and as we know that's not OK. Actually it sounds to me like our state reps are practicing medicine without a license -- which happens to be illegal, you know?
(c) Most of the laws make no provision for victims of sexual trauma who may be re-traumatized by this process. In fact, the Oklahoma bill which was vetoed by the governor even specified that if the abortion is taking place very early in pregnancy, the ultrasound must be done with an intra-vaginal wand, rather than over the abdomen, to "give a clearer image." I was struck to the core when I read this. Like the state was mandating a second rape -- yes, that's what it's called when someone puts something in you that you don't consent to -- if you wanted an abortion.
(d) Most strikingly: I have never seen a patient change her mind about her abortion because of an ultrasound. My clinic does perform a sonogram before every procedure. By law, clients fill a form indicating whether they want to see the image, listen to the "fetal heart tones if present," both, or neither. We get back forms with all sorts of answers, meaning plenty of clients do choose one or both, but I don't know of anyone who has said, "Oh my god, you know what? I had NO IDEA there was an embryo in there! I thought an abortion was something to do with my bladder! Now that I know, there's no way I can go through with this."
(e) Which brings us back to the conclusion at The Curvature: it's probably not at all about changing patients' minds, but simply yet another approach in the campaign to guilt, shame, isolate and traumatize women who choose abortion. To punish them for having made this choice that we know she will go through with, because women are not stupid and women are not children, they understand their lives better than a stranger ever could and they already know in their guts what they are capable of at this moment.
Sometimes that's giving birth and giving her parental rights to another family.
Sometimes it's leaving high school or going on public assistance in order to afford a wanted, or perhaps unwanted, child.
And sometimes it's selling her furniture to scrape together 400 or more dollars (have you ever had someone count dollars and nickels on your desk for a medical appointment?), facing a crowd of clueless shame-mongers, listening to maudlin scripts written by state legislators while her pants are down and a high-tech stick is moving around in her vagina, watching a video about a screaming fetus, spending six hours in a crowded waiting room, and having a safe five-minute procedure before going back into the world, back through the clueless crowd, back to her loved ones and not asking them for reassurance that she is still a worthy human being, because they might rebuke her, because they might not understand, because they've heard from ten thousand shame-mongers that anyone in their right mind who's seen an ultrasound would change her mind and leave the abortion clinic. Yes, sometimes women are capable of all that. But god forbid we make it any easier on them.
Posted by placenta sandwich at 1:30 PM