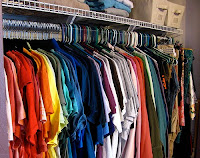 The post About a Girl wrote last week -- Coming Out: I'm an Abortioneer -- has had me thinking. The post spoke to me because I have gone through the process of coming out as gay, and I'm an abortioneer. Coming out as a lesbian was a process, and I remember years of silence before I felt comfortable being out in most social situations. I recently began working in a new clinic in a liberal town which nevertheless has a lot of people who do not understand homosexuality and thus fear it or judge it. For the first time in my adult life I am not out at my job. It's challenging some days. When I talk about my lover, which is rare, I change her pronoun because I don't want to out myself. I am slightly confused at my choice to live closeted at my job as an abortioneer; but I am not interested in dealing with others' judgment or debating a part of my life that is not debatable.
I am currently on a trip abroad attempting to learn another language. I have chosen a place where I feel completely comfortable coming out as gay. However, due to the political and religious climate, I have chosen not to out myself as an abortioneer. I have learned to tell people in another language that I work for a clinic that serves women who are pregnant. I tried to think of the closest thing to the truth without "outing" myself. It's challenging to compartmentalize myself like this, but I don't feel I have much choice.
Recently I encoutered a Christian woman who knows I'm gay but does not know about my work as an abortioneer. She told me that she had a responsibility to tell me gay people are going to hell. She compared it to having a cure for a disease and watching someone die. She proceeded to tell me it was really hard for her to keep her mouth shut because she felt like she was not being true to herself and her beliefs. All I could do was laugh inside. I told her that her belief system could not coexist with who I am, therefore I do not care what she thinks. I also told her I can relate to hiding an integral part of who I am.
I know many queer people who are also abortioneers. I often wonder what brings us to this work, when in some ways it could be assumed that it has little to do with our personal lives. Reproductive rights and LGBTQ rights are about freedom, control of your body, and choice. I don't think anyone would choose to live in a closet. It's usually out of necessity, painful necessity.
Posted by sparky at 3:04 PM