Welcome back to Rebecca, a fellow abortioneer who’s agreed to spin us a MOTA (mates of the abortioneers) romance for the ages. You can go back here to read about how they first had "the A-word talk." When you're done with that, read on below for Chapter II, which in my head I've unofficially but fondly titled "My Husband Sleeps With One Eye Open."
~~~~~~~~~~~~~~~~~~~ 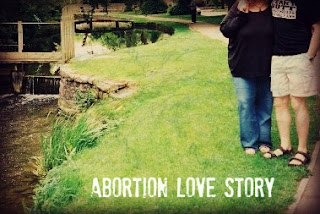 At first, C didn't really "get" the security factor at work. You know: the protesters. He's European and from a secular country; and he'd lived overseas for years. He wasn't aware abortion was such a contentious issue in the USA because it wasn't in his country. (I also think that because he’s a guy, he probably didn’t pay much attention.)

He was surprised to see all the protesters we'd get sometimes and how they'd harass clients. We were lucky at our clinic -- we didn't have TONS of protesters like many others did -- but he was still shocked to see them.

When we had more than the usual number of crazies out, I didn't like leaving my car at work. The protesters were taking pictures of our license plates; my car was registered to my home address. (I know, I know. Not smart!) I didn’t exactly feel like getting followed. I lived alone in a smallish city and my car was fairly easy to identify.

Early on in our relationship, the clinic was experiencing one of those big protester days, so I asked C picked me up from work so my car wasn't left in our car park all day. As we approached my vehicle, he dropped the car keys. I noticed he took a fraction of a second longer picking up the keys than I thought he would, and that made me a little twitchy. I wasn't sure why.

Later, when I was ranting about protesters, C told me he was concerned about my safety. And then he admitted he had dropped the car keys purposefully .

Why? With his diverse background, including a military history and working in war-torn countries, he had learned certain skills.  It was a trick they used in some of the places he'd been: they'd drop the keys, bend down to get them, and steal a glance under the car to see if there was a bomb.

A car bomb? I was a bit shocked. My first thought was, "That’s not necessary! Nothing like that would happen here!" Yet it was instinctual for him to check.

He explained how surreal it was for him to be so immediately, intimately, acutely impacted by my work: all because of protesters. Part of me was like, "Yeah, well, welcome to our world."

His reaction had been jarring, though. I usually didn't tell family/friends about protester activity or security threats. I didn't want to worry them. Really, I didn't want to deal with their worries on top of mine. They would've told me to quit. This was the first time I saw how security issues at the clinic directly affected someone I cared for. I wonder whether all abortioneers experience that, and how.

Throughout the years, C was vocal about his security concerns. Because of his experience, he didn't think my clinic always took those risks seriously enough. He’d often say he'd do things differently, or thought things like a better alarm system would be a smart move.

He criticized the clinic when they stopped having guards on clinic days, especially when protester activity increased. We lived in the Pacific Northwest where it's pretty normal to carry handguns. The clinic guards regularly pulled guns and knives off guys.

It was hard for me to listen without feeling defensive and thinking he wasn't critical, really, underneath it all, about abortion, about my job, about work that I loved.

I now understand that wasn't the case: he was just genuinely worried sometimes. Which is a shame. It's a shame we have to work in conditions, in the United States, where our family worries about us because of some crazies. Have you had similar experiences?
Posted by placenta sandwich at 10:09 AM