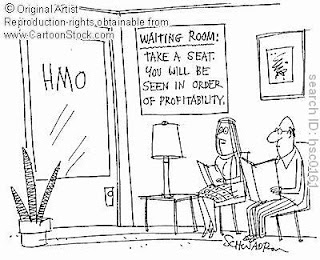 When I worked at an abortion clinic we had a laundry list of questions we asked clients when making their appointment. The standard question went like this, “do you have Medicaid, military status, or private insurance?” We spend a lot of time in this blog or in other abortion’y type news sources discussing Medicaid, abortion funds, and clients’ all-around inability to pay. But what about those who have private insurance? It was very common for women to be surprised that private insurance was an option, mainly because abortion is so completely stigmatized and compartmentalized that no one assumes it would be covered by their policy; abortion has become so moralized and fraught that we forget it is a medical procedure that deserves coverage just like an appendectomy or cardiac bypass.

Quick and dirty: Private insurance that is employer-based (as it currently stands) can and often covers “elective termination.” However, an employer can restrict this coverage and many do (back in my clinic days: Walmart and Cracker Barrel to name a few). When an employer-based policy DOES offer coverage, there is often a deductible (can be up to a few hundred dollars) or there is a co-pay (usually no more than $100, but can depend what type of facility the procedure is done in). Usually it is much cheaper to use private insurance than to pay out of pocket. However, we had a slew of clients who didn’t want to use their insurance. Sometimes they were afraid their employer would find out. Sometimes I think they just did not want any sort of official record of their abortion.

We should take a few steps back though, because using private insurance is never as simple as swiping a card. In fact, some of the smaller insurance companies we worked with were near impossible to nail down in terms of the costs that a client would have for a deductible and/or co-pay. Or, in the case of employers that only provided coverage for rape, incest, or fetal anomalies, it could take weeks before we got approval or even just a basic response for what a client needed to pay up-front. We would urge clients to call their insurance companies themselves and find out the fees but ultimately someone from our clinic needed to call and confirm the costs, which resulted in endless hours on the phone and bickering with insurance companies over whether or not someone was covered. And yes, we did sometimes encounter the lovely insurance company reps that were easy-breezy to work with and who supported abortion and you never felt like they were rolling their eyes or begrudgingly giving you info that you were legally entitled to.

I’m bringing this up because myself and a few close people in my life have recently tried to navigate the world of private insurance and come up against some significant barriers. I’ve been given three of four different quotes on costs from different sources and I’m still not entirely sure I paid the correct amount for a procedure I had. A friend received bills for services he assumed were covered because at the time of care he called his insurance company to confirm. Now, I like to think that I’m pretty literate when it comes to health insurance, yet I have become so frustrated with receiving care and the confusion over costs that it makes me want to ignore my health altogether just to avoid this HOT MESS that we call health insurance coverage.

Moving forward as we continue to fight for universal health care we must recognize that access to insurance is not enough. There needs to be education around how to navigate the system and also health insurance literacy so that all consumers maximize their benefits. Insurance companies are businesses and they are not incentivized to throw any of us a bone, in fact they will do everything they can to take advantage of us who don’t know how to use our benefits.
Posted by Vegan Vagina at 7:30 AM