My favorite thing about antis is the constant lying. I like it because it reinforces that I'm not an idiot. And the satisfaction that comes with just knowing, let alone demonstrating, that you're better than the competition is pretty much perfection. 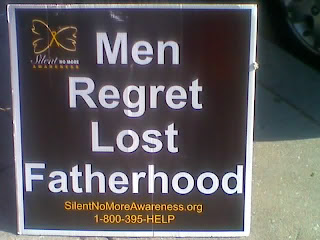 This one is new to me, and I suspect it's also new to the antis, as it was printed on the back of a re-purposed sign that reads "Women Regret Abortion". I suspect that once that whole tactic got old and continued to have zero impact, they decided to take a new angle. One equally baseless and absurd. My final suspicion is that this stems from a semi-recent controversy in New Mexico, in which a man posted a billboard chastising his ex-girlfriend for having an abortion and robbing him of fatherhood. The billboard is just weird. Read about it from the antis' delightful POV: Antis make stuff up a lot.

Now, I can see myself being sympathetic to such a man, assuming that he were in a legitimate relationship in which there had been full disclosure from each partner about their parenting ambitions (or lack thereof) and clear respect for each other's wants. Clearly that is not the case here, ergo this guy and any other guy who pleads such a case (I haven't heard of any others) can go shove it. If he were in any kind of real relationship with a woman whose child he wanted to raise, he might have had more tact in expressing his parenting ambitions, perhaps before he reached a point of no return.

So all this pondering about these poor childless men had me a little confused. I mean, this is the only guy I know of who'd ever gone public about the loss of something he never had to begin with. I wondered, where were all these men? These sad sacks who wanted nothing more than to be daddies, but who were denied that honor by scorpion women who pierced their souls and aspirated their offspring. I started thinking back to my days counseling abortion patients and their loved ones. I'd spoken to hundreds of women who were pregnant but couldn't get her partner to contribute to her abortion fund, or to help her raise the child should she carry to term, or just plain couldn't find her partner! Certainly these were not the men who regret lost fatherhood. They actually seemed really content to act like the whole thing never happened.

I pondered it some more. I pondered and pondered until I decided that a) either the whole premise of "lost fatherhood" was faulty to begin with, or b) it's so crazy that it must be entirely legitimate and that something must be done!

Since I like to help out the little guy, I went with b.

Ladies and gentlemen, I present to you the Lost Fatherhood Network for Parenting Needy Children! Here at the LFNPNC, we care about children, but we care way more about the men who don't have them because they just can't manage to force a woman to have a baby. The LFNPNC is an online service that allows barren men to create profiles and be linked up with women searching for father figures. They can then fulfill their fatherhood dreams, be instantly wanted and accepted into the lives of children, without having to deal with those persnickety women who "just aren't ready to be mothers". The LFNPNC's mission is to
FINE PRINT: Additional, yet totally secondary benefits include:

But seriously. I would be down for some serious funding for anti programs that ACTUALLY HELP CHILDREN. Because the truth is, as we all know, antis don't actually give a shit about children. There are bajillions of struggling, born children out there who could really use help from these blubbering windbags, but instead they're out for whatever they can get their hands on. Any dude in this country could be a father if he wanted to. There is no shortage of need. But as things stand, a man in New Mexico who doesn't get his way can just slander a woman publicly and that's cool because he's a man and how dare a woman do something totally legal without his permission? THIS IS BULLSHIT.

Men out there, if you really care for children, then go do something for one. Adopt one. Babysit one. Read to one. Hell, just hold the door for one. Or, if you don't, then just be up-front about it. I have even less respect for these "lost fathers" than for deadbeat dads, because at least they're not liars. If you don't want kids, then just say so. If you do, Google "adoption agency" and you'll get 7,000,000+ results.